A colloid is primarily a heterogeneous mixture in which the minute particles of one substance are dispersed in another substance, called the dispersion medium.

The minute particles here are 1 to 1000 nanometers in diameter but they still remain suspended and do not settle at the bottom of the mixture. They are visible under an optical or an electron (smaller particles) microscope.

A colloid is a mixture in which one substance which has fine particles (dispersed phase)  mixed into another substance (dispersion medium). The particles of the colloids have a range from 1 to 1000 nm in diameter. The solution is called colloidal dispersion because the particles of solutions do not mix or settle down. They are dispersed in the solution.

Colloids can be classified according to different properties of the dispersed phase and medium.

Firstly, based on the types of particles of the dispersed phase, colloids can be classified as:

When the dissolution of smaller molecules of substance or a large number of atoms takes place, they combine to form a species whose size is in the range of colloidal size. The species formed is known as the multimolecular colloids.

For example, Sulphur solution contains particles which have thousands of S8.

The formation of the micelles occurs above a particular temperature called the Kraft temperature (Tk) and also above a specific concentration called the critical micelle concentration. These colloids can be reverted by diluting it. Examples of some associated colloids are soaps and synthetic detergents.

The following table describes the types along with examples: 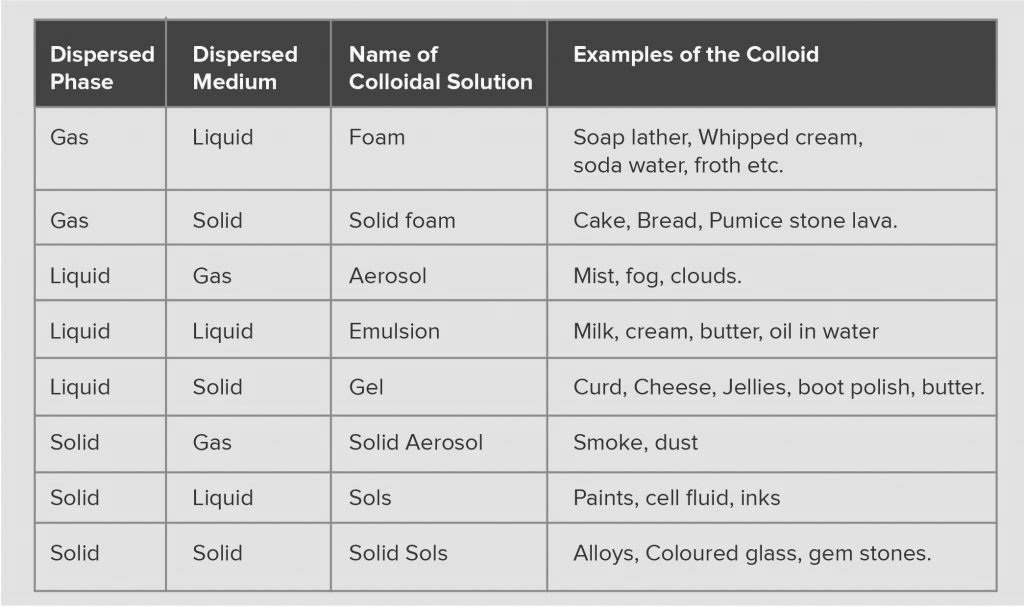 Based on the nature of the interaction between the dispersion medium and the dispersed phase, colloids can be classified into lyophilic and lyophobic.

If the dispersed phase has little or no affinity for the dispersion medium, the colloid is called a lyophobic colloid. The words lyo and phobic means ‘liquid’ and ‘fearing’ respectively. Hence, they are liquid-hating. They are difficult to prepare because the dispersed phase does not readily form a colloid with the dispersion medium, they require some special methods. They are unstable and require stabilizing agents for their preservation. They are also known as extrinsic colloids. Examples are sols of metals like silver and gold, sols of metallic hydroxides, etc.