Ever wondered how forensic scientists analyze the smallest of ounces of evidence they find in a crime scene? Well, with the help of mass spectrometry you can even find out about the different isotopes associated with that element. Let us learn a bit more about Mass Spectrometry.

What is Mass Spectrometry?

Mass spectrometry is an analytical method to find the molecular mass of a compound and indirectly helped to prove the identity of isotopes.

Based on Newton’s second law of motion and momentum, a mass spectrometer uses this property of matter to plot ions of varying masses on a mass spectrum. From the law, we infer how much mass is relevant to the inertia and acceleration of a body. This principle is applied to the aspect where ions with different mass to charge ratios are deflected by different angles in an electric or magnetic field.

A mass spectrum is a graph obtained by performing mass spectrometry. It is a relation between the mass to charge ratio and ion signal. 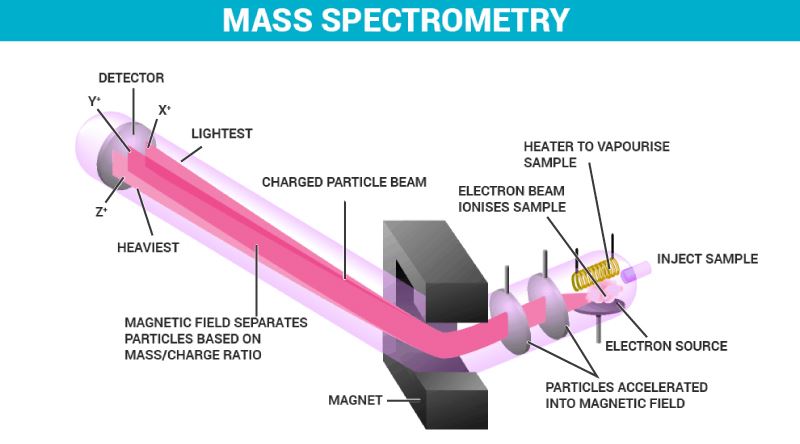 The four main parts of mass spectrometry are discussed below:

2. Accelerator – The ions placed between a set of charged parallel plates get attracted to one plate and repel from the other plate. The acceleration speed can be controlled by adjusting the charge on the plates.

4. Detector – The ions with correct charge and mass move to the detector. the ratio of mass to charge is analysed through the ion that hits the detector.

How does Mass Spectrometry Work?

In a regular mass spectrometer, we initially have the material to be analyzed, but we need it to be ionized to pass through the spectrometer with enough energy. Thus, the sample is bombarded by electrons to ionize it.

This ionized beam is now passed through a series of electric or magnetic fields depending on the type of the sample and its properties. The ions are deflected by the field through which they are passed through in such a way that the ions with the same mass to signal ratio will follow the same path to the detector.

These charged and deflected ions are now incident onto a detector which is capable of distinguishing the charged particles falling on it. Based on the mass spectrum produced by the charged ions, we can identify the atoms or molecules constituting the sample by comparing them with known masses or through a characteristic fragmentation pattern.

One disadvantage of mass spectrometry is over hydrocarbons. The method fails to distinguish between hydrocarbons producing similarly fragmented ions.