Addition and Subtraction of Integers

Mathematics is a subject that deals with numbers. An arithmetic operation is an elementary branch of mathematics. Arithmetical operations include addition, subtraction, multiplication and division. It helps us to find the sum (total) or difference (how more or less) of something. Not only sum or difference, it also helps one to compare and divide things equally. Arithmetic operations are applicable to all real numbers including integers. 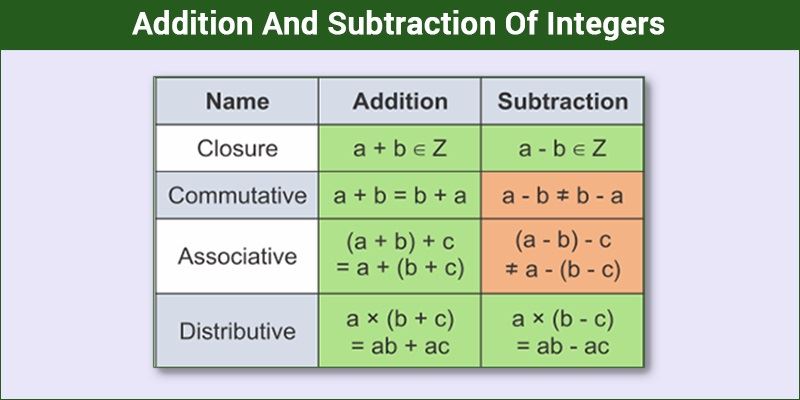 Integers are a special group of numbers that are positive, negative and zero, which are not fractions. Rules for addition and subtraction are same for all, whether it is natural number or an integer, because natural numbers are itself integers. We just extend the rule and apply it for integers as well.

Addition of Integers: Addition of integers means there are three possibilities. They are:

Whenever a positive number and a negative number are added, sign of the greater number will decide the operation and sign of the result. In above example 10 + (-15) = -5 and (-10) + 15 =5; here, without sign 15 is greater than 10 hence numbers will be subtracted and answer will give the sign of greater number.

Alternatively, to find the sum of a positive and a negative integer, take the absolute value (“absolute value” means to remove any negative sign of a number, and make the number positive) of each integer and then subtract these values. Take above example, 10 + (-15); absolute value of 10 is 10 and -15 is 15.

For the ease of calculation, we need to renovate subtraction problems into addition problems. There are two steps for this:

Once the transformation is done, follow the rules of addition given above.

Step 2: Take the inverse of the number which comes after the sign