Coordinate Geometry is considered to be one of the most interesting concepts of mathematics. Coordinate Geometry (or the analytic geometry) describes the link between geometry and algebra through graphs involving curves and lines. It provides geometric aspects in Algebra and enables to solve geometric problems. It is a part of geometry where the position of points on the plane is described using an ordered pair of numbers.

Coordinate geometry (or analytic geometry) is defined as the study of geometry using the coordinate points. Using coordinate geometry, it is possible to find the distance between two points, dividing lines in m:n ratio, finding the mid-point of a line, calculating the area of a triangle in the cartesian plane, etc. There are certain terms in cartesian geometry that should be properly understood. These terms include:

You must be familiar with plotting graphs on a plane from the tables of numbers for both linear and nonlinear equations. The number line which is also known as a Cartesian plane is divided into four quadrants by two axes perpendicular to each other, labelled as the x-axis (horizontal line) and the y-axis(vertical line). Learn more about the coordinate system or the cartesian coordinate system here and know its importance in coordinate geometry.

The point at which the axes intersect is known as the origin. The location of any point on a plane is expressed by a pair of values (x, y) and these pairs are known as the coordinates.

The figure below shows the Cartesian plane with coordinates (4,2). If the coordinates are identified, the distance between the two points and the interval’s midpoint that is connecting the points can be computed. 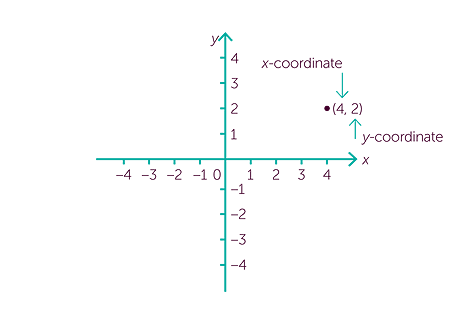 Equation of a Line in Cartesian Plane

Equation of a line can be represented in many ways, few of which is given below-

Let x,y be the coordinate of a point through which a line passes, m be the slope of a line, and c be the y-intercept, then the equation of a line is given as-

(iii) Intercept Form of a Line

Consider a and b be the x-intercept and y-intercept respectively, of a line, then the equation of a line is represented as-

Slope of a Line:

Consider the general form of a line Ax + By + C = 0, the slope can be found by converting this form to the slope-intercept form.

Comparing the above equation with y = mx + c,

Thus, we can directly find the slope of a line from the general equation of a line.

Thus, the distance between two points is given as- 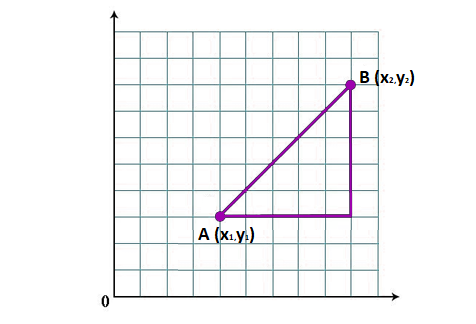 Angle Formula: To Find The Angle Between Two Lines

Substituting the value in the equation above,

Substituting the value in the original equation,

Section Formula: To Find a Point Which Divides a Line into m:n Ratio

Students can follow the link provided to learn more about the section formula along its proof and solved examples.

Area of a Triangle in Cartesian Plane:

Examples Based On Coordinate Geometry Concepts

Applying the distance formula we have,

For a line parallel to the given line, the slope will be of the same magnitude.

Substituting the given points in this new equation, we have

What is Abscissa and Ordinates in Coordinate Geometry?

What is a Cartesian Plane?

A Cartesian plane is a plane which is formed by two perpendicular lines known as the x-axis (vertical) and the y-axis (horizontal). The exact position of a point in Cartesian plane can be determined using the ordered pair (x, y).

Why do we Need Coordinate Geometry?