The capacitor is defined as an electrical component that has the ability to store energy. The energy is stored in the form of electric charge. There are different types of capacitors.

This constant of proportionality is known as the capacitance of the capacitor. From the equation, it may seem that ‘C’ depends on charge and voltage, but actually, it depends on the shape and size of the capacitor and also on the insulator used between the conducting plates. Its SI unit is Farad.

Capacitance is defined as the ability of an electrical component to hold the electrical charges. The capacitance of any capacitor can be either fixed or variable depending on their usage. For plate capacitors, larger the plate size, lesser the distance between, better is the capacitance value.

This is one of the most common types of capacitor used. It has two parallel plates separated by a distance d (as shown in the figure). 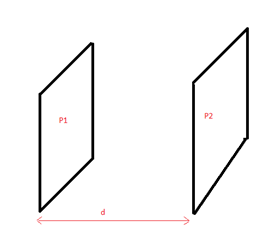 From Gauss law, we know that electric field due to a plane charged sheet is

D is the charge density on the sheet.

Suppose plate P1 is positively charged and P2 is negatively charged. Then Electric field in the region to the left of P1,

Similarly it is zero for the region to the right of P2.In between the plates the electric field will be,

The direction of this field is from positive to negative plate. Now we will try to find the expression for capacitance.

From the equations we get,

As we can see from the above equation it only depends on the dimensions of the conducting plates.

What is the effect of dielectric on capacitance?

The effect of dielectric on capacitance is that the capacitance value increases when the dielectric is either constant or when the relative permittivity is large. Air acts as a dielectric between the two parallel plates.

What is the effect of spacing on the capacitance between the two plates?

The effect of spacing on the capacitance is that it is inversely proportional to the distance between the two plates. Mathematically it is given as:

What is the effect of area of the plate on the capacitance?