Lightning is one of the most beautiful displays we can see in our nature which can certainly be deadly at times. It is a sudden electrostatic discharge between the electrically charged regions of the cloud. As we know that it occurs due to electrically charged storms but still the method of charging of clouds remains elusive. 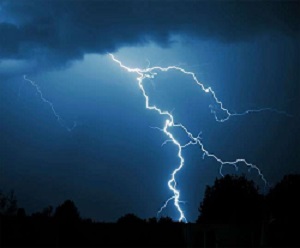 In the ancient times when amber was rubbed with fur, it attracted the light-weighted objects such as hair. If we change our cloth in the dark we will see or hear some kind of spark. In 1752, one of the American scientists Benjamin Franklin said that the phenomenon of sparks from the clothes and lightning is same but people did not agree with him and it took 100 years to realise the truth.

We have seen electric sparks at many places for example sometimes we see electric sparks in electric poles when the wires become loose. We also see sparks in the plug if the connections in the socket are loose. In ancient times people did not understand the cause of lightning and they thought that it is some kind of wrath of gods which is visiting them.

Have you experienced a static electricity shock? Or witnessed sparks when you take off your jumper? When lightning is made the same thing happens, but on a much bigger scale. Below, we have listed points sequentially on how or why lightning occurs.